I am a Landcruiser Nerd.  I don’t tape on my glasses, or wear a shirt pocket pen holder…

But – I do live and dream about landcruisers, and have a few in my yard.  For the number of times that people have asked – “How many landcruisers do you have ?”, had they given me 1$ – I could have bought another one. !

Yes, I do have a few, and am still looking at landcruisers for sale.  One day a few weeks ago one caught my eye.  It is a 1984 BJ60 that had been converted to a pickup (Australian ‘Ute’). Although in much better condition that mine, it looked very similar.  Could the same person have done the conversion from SUV to pickup ? 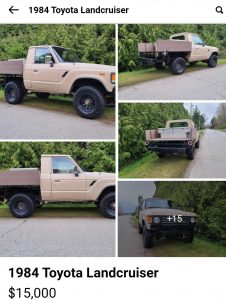 I contacted the owner so determine if he had any information. Interesting enough, he had also been contacted a few months ago asking if he had seen a similar truck with a custom deck, a vehicle that he had modified 16 years previously.

Well, that truck is the one I have now !.  Strange coincidence ! 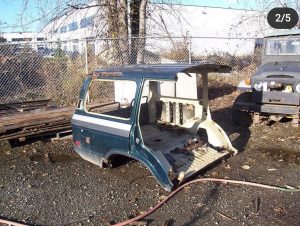 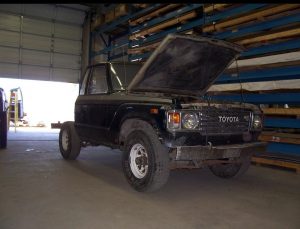 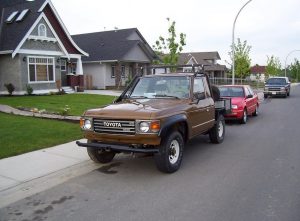 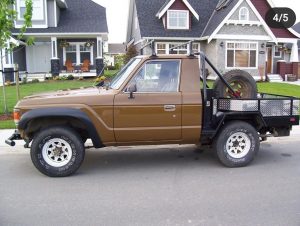 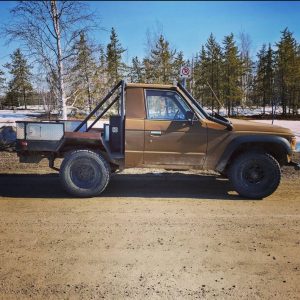 It hasn’t changed much. The paint is more dull, a bit more dirty, door corners are rusty. It even had the same roof rack (which I have since removed).

During that time it was in Lytton BC and Salmo BC with two different owners.

For this 1982 Toyota Landcruiser it literally is the end of the road. It has approximately 370,000km on the dial. Is it restorable ?. Probably, but not economical. 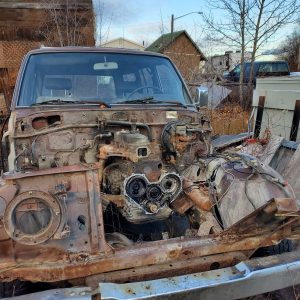 Its parts will live on in other vehicles. Conveniently, most of my fleet is also 1982 BJ60 Landcruisers and also the BJ42.

Thus far, two days to get to this partially disassembled state. I’ve never taken an entire vehicle apart. Actually, I do my best to avoid taking things apart – as that usually mans what ever it was is broken, and there is no guarantee that me taking it apart will ever result in a successful re-assemley.

In this case, instead of cutting and hacking the vehicle to pieces, I am trying to be organized. Bags of screws and bolts from each….except I forgot to label the bags (frown).

It is a therapeutic process. Not simply sweet revenge on something mechanical, bashing with with a sledge hammer, smashing al the pieces into smithereens. Instead, it is a thoughtful process, determining the order that parts were assembled, and how there were attached. How is this thing attached, where are the nuts and bolts, which tools do I need, and how do I get my fingers and hands in there to turn the wrench.

Sometimes it is easy. The screws loosen and the piece is easily removed. Overtimes, I just can’t find the darn bolt, or can’t get my hands in position to turn the wrench, of the screw is stripped, or – I just don’t have the right tool. Ok – be like McGiver and figure it out. In case you are too young to know, McGiver was a TV character who could always build a tool using only what was available.

And, then there his the physical effort of reaching in and over, in awkward positions, dropping a bolt an drawing under the truck, back to the tools, back to the engine, get another tool…over an over. It isn’t cardio activity, more like yoga. Stretching, holding poses, and mindfulness. Yoga Mechanics ?

Purists will scoff. Call it what you like-
For me, it is a welcome relief from sitting (“driving a desk”), moving only my index finger all day.

After a couple of hours of Yoga Mechanics my body and mind feel relaxed.

What is your equivalent of Yoga Mechanics ?

Camping with the 23Zero rooftop tent and Propex pr

Beth Cowan - This is so Beautiful!. Thank you. Han

First time out with the ol'girl. Ha - the young pu

One of those weekends!. Boated to a tent for the w

The replacement part fits - sort of !. Wires and c

Late night watching the northern lights and a happ

When you ask someone to take a picture of you and

I don't ever use a fish scale for fishing, but do

Garden lunch. See how many different veggies you c

Throw back Thursday. The pictures that were bookm

Differential fluid leaking out of the steering knu

Listening to Folk on the Rocks live stream, from

Camping dinner- kababs on the biolite. #camping #b

A weekend canoe camping trip with friends and my d

It's a special occasion when someone appreciates m