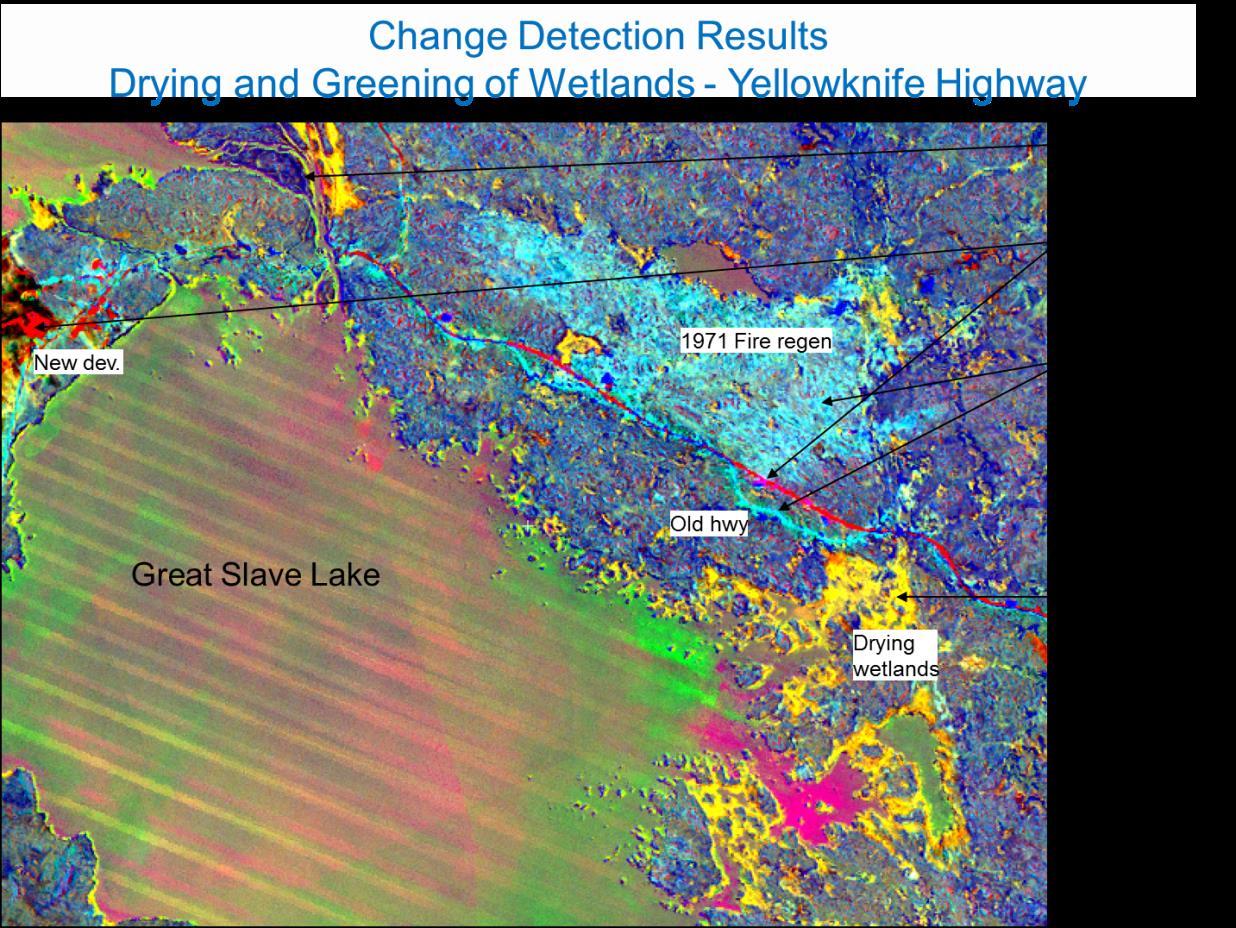 It is mid July, and you are motor boating through a myriad of islands on the way to your cabin. All is well until the prop hits a rock. You had been through this channel a million times before, and had never hit a rock. What’s Up ?. A few minutes later, as the boat rounds the last island before the cabin, you realise that the trees and shrubs look different. The cleared area in front of the cabin is now covered with shrubs, the shoreline is much farther back than it used to be, and the cabin is starting to sink into the ground !.  We all know that water levels change during the year, and that shrubs grow in cleared areas. Some of these changes could be just a natural part of a cycle, but what if they aren’t?.

To help understand, the causes and effects of these landscape changes, and if the changes that we are seeing on the landscape are part of a natural cycle or longer-term trend, a team of Federal, Territorial and University scientists are working on a project in the Yellowknife area. Using satellite imagery collected during the past 30 years, and remote sensing techniques we were able to visualize past and on-going changes to the landscape. One of the techniques, called Tasseled Cap Transformation, uses mathematical formulas to calculate values for brightness, greenness and wetness from a satellite image. Brightness represents a measure of reflectance from the surface; features such as bare soil, man-made, and natural features such as concrete, asphalt, gravel, rock outcrops, and other bare areas are considered bright. Greenness is a measure of vegetation; more vegetation is indicated by brighter green areas. Wetness is a measure of surface wetness including soil and plant moisture; wetter areas on the surface indicated by brighter colors on the satellite image. Satellite images spanning the 30 years of available data were analysed for landscape features that represent the Tasseled cap values for Brightness, Greenness, and Wetness.  Combining the Tasseled cap values from each separate satellite image, allows the long-term trends in the change of Tasseled cap values for Brightness, Greenness, and Wetness can be observed.  In Figure 1, the combined Tasseled cap values for Brightness are represented as shades of red, Greenness in shades of green, and Wetness in shades of blue, with brighter colors representing brighter, greener and wetter areas. 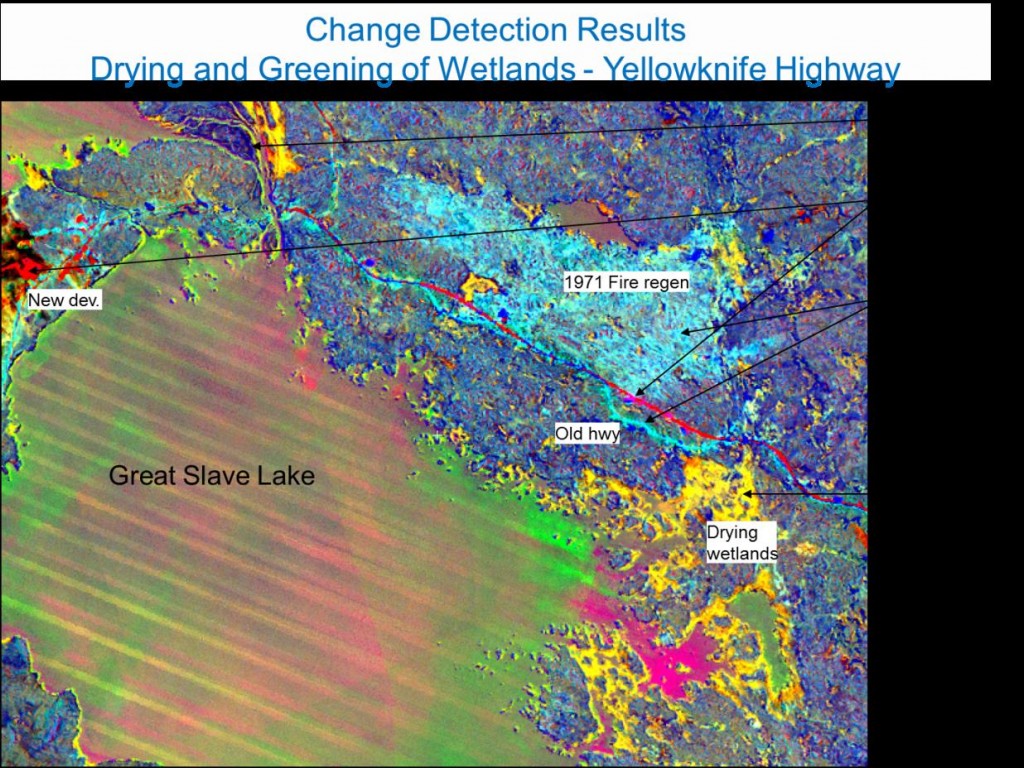 So, what do all the colors mean ?. Using field observations and photos taken from a helicopter, we are able to directly relate the trends (and colors) to observable and recognizable features on the landscape. A photo from the helicopter (Figure 2) over the circled on Figure 1, shows a small inlet with ring of brown vegetation (drying wetlands) and an inner ring of bright green vegetation (new vegetation growth). The combined Tasseled cap colors Brightness, Greenness, and Wetness for this area are yellow and green respectively, suggesting a trend during the past 30 years of yellow areas indicating drying up wetlands, and green areas where there is new vegetation growth.  Similarly, areas shown in pink (top left, Figure 1) are presumed to be non-vegetated shallow water areas including dried bogs (Figure 3). A photo of the old and new sections of Highway 3 (Figure 4), shows new vegetation growth on the old section, and paved, wide cleared area with no vegetation, corresponding to light blue and red areas on Figure 1. Areas shown in dark blue, are presumed to be the result of a change to a darker and a wetter forest.  The greenish color and banded pattern in the water is a by-product of processing of the imagery and can be ignored. 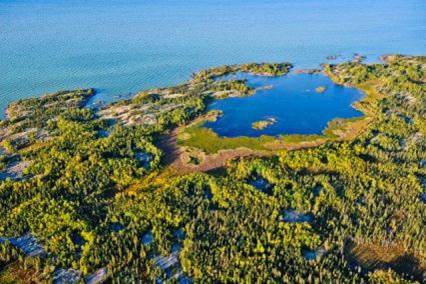 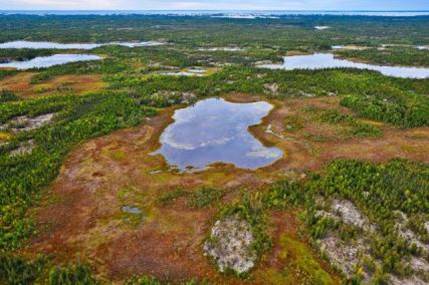 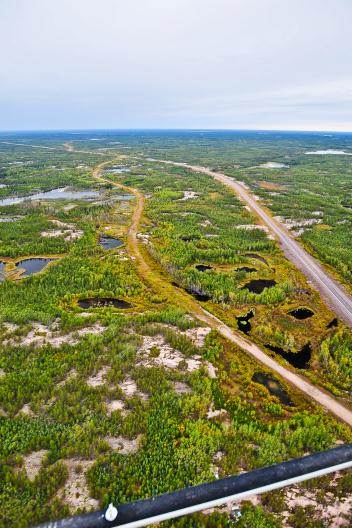 Based on this work, we observed the two major trends shown in the Tasseled Cap Transformation:

1)    Apparent lowering of water levels along the shoreline of Great Slave Lake, and in nearby lakes, and shoreline vegetation appears to have expanded in bays. What is not yet fully understood, is the cause of the apparent lowering; it is due to lowering water levels and/or isostatic uplift (land rising after the weight of the glaciers has been removed). Most likely it is a combination of both.

What do these trends mean in the long-term ?. Are some of these changes just a natural part of a cycle ?. Or – is there any reason to believe that these are the early part of a longer and continuous trend leading to a major climate shift ?.

The data used in this study used satellite imagery that is only available going back 30 years, and does not give any indication of what climatic and landscape changes were occurring in the region 60, 100, 500 or 1000 years ago. Without the long term record, not realistically possible to make long term predictions of the landscape changes into the future. In the short term however, we can predict that water levels will continue to lower and, if growing conditions have recently become better suited to conifer growth, there may be a successional transition from broadleaf forest (beech trees) to conifer trees.

In this project, we have shown landscape change trends in the Yellowknife area. For you, these trends might make it more difficult to navigate to your cabin, and how and where you build your cabin. More importantly, some of the trends in landscape changes observed via the Tasseled Cap Transformation may represent changes which cannot be directly observed. A trend indicating a transition to more-dominate to conifer may also affect the frequency and abundance of forest fires, and may also reflect a change (degradation) in underlying permafrost patterns. The impact of degrading permafrost may have a large impact on a wide range of infrastructure. Anyone who has driven Highway 3 (Yellowknife –  Behchoko) will certainly remember a few bumps in the road, the vast majority of which were caused by changes in the permafrost under the highway.

There probably isn’t too much that can be done locally to prevent many of the changes.  It is however, important to continue research to understand the underlying causes for the changes. Continued monitoring the changes, will provide useful information to decision makers, for example by showing which areas and terrain features are more sensitive and susceptible to change.

This work is conducted as part of and Natural Resources Canada’s project on Transportation Risk and Climate Sensitivity (TRACS).

(3) School of Environmental Studies, University of Victoria, Victoria, BC

(5) Department of Geography, University of Ottawa, Ottawa, ON 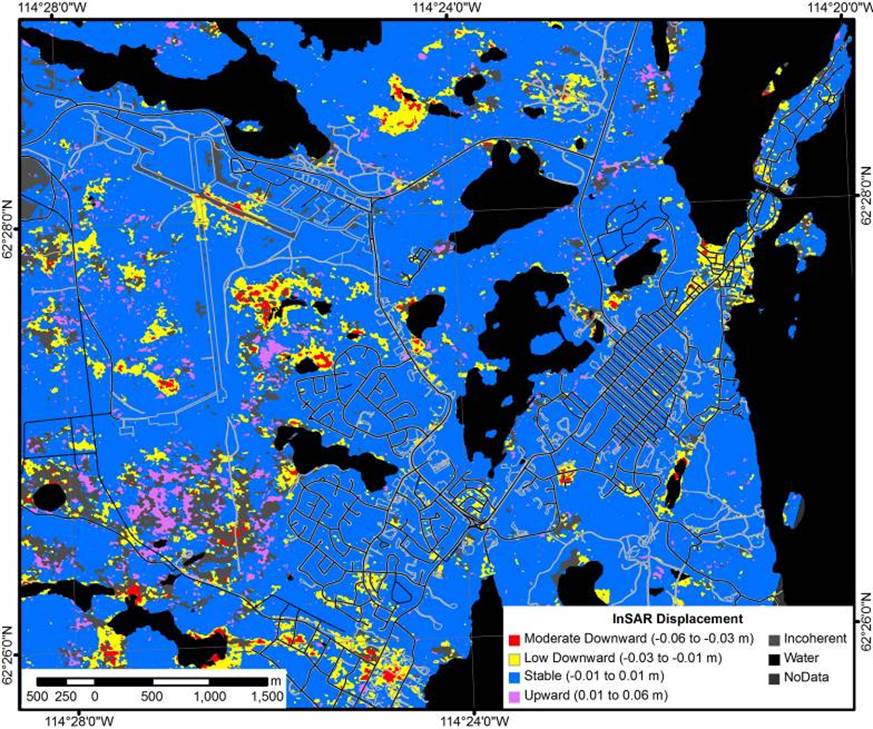 Another satellite in our tool box is the Canadian designed and built Radarsat. Compared to most other satellites, it does not take pretty pictures. Instead, the Radarsat satellite fires a radar beam to earth at a specific wavelength, and the beam bounces off the surface of the earth and returns back the satellite. Differential Interferometric Synthetic Aperture Radar (D-InSAR) is a technique that uses repeat synthetic aperture radar (SAR) observations, separated in time, of the same area on the Earth’s surface to detect small movements of the ground surface. Since the satellite is moving in an along a fixed orbit at constant height above earth surface, the distance between the satellite and a specific point on the earth’s surface is a constant. With a repeat observation, millimeter-scale changes in the distance between the satellite and the earth’s surface can be calculated by comparing the phase shift of the wavelength of the radar signal that was fired by the satellite. A 3D model (digital elevation model) is used to remove the phase difference resulting from topography and the remaining phase difference is converted to vertical displacement which represents the displacement of the ground surface. Although this is a simplistic explanation of the process, a more detailed discussion of these processing steps may be found in Short et al. (2011).

Using SAR data collected during the summer of 2010, scientists at the Canada Centre for Remote Sensing, the Geological Survey of Canada, along with their northern partners, used differential interferometry techniques to map ground surface displacement in the Yellowknife area. Figure XY shows the ground displacement derived using stacked RADARSAT-2 D-InSAR from May 23 to September 20, 2012. The results are categorized in terms of the relative amount of displacement rather than focussing on the absolute values (units are in meters). Areas shown in red and yellow, are undergoing low and moderate downward displacement (subsidence) in the range of -1 to -3 cm and -3 to -6 cm per season, respectively. Ground that is considered stable, where no vertical change was calculated is shaded in blue.  Areas where the displacement is upward, due to ground surface heave or vegetation growth of up to 6 cm, are shown in pink.  At some locations, labeled ‘Incoherent’ the vertical change is presumed to be significant and is beyond the measuring capabilities of the D-InSAR process.

Verification of the results of the InSAR displacement in areas identified as having moderate seasonal surface subsidence. We observed and measured indications of subsidence such as undulating roadways, areas that were presumed or measured to have been levelled when constructed, and noted and measured cracks and rotated sidewalks.

The purpose of this study is to present and interpret D-InSAR measurements of seasonal surface displacement over discontinuous permafrost terrain in Yellowknife. We conducted field verification to support the results observed by the InSAR process by documenting areas undergoing low and moderate downward displacement and noting the impacts on private property and municipal infrastructure. Mapping of surface displacement is important to assess ground and infrastructure stability, and to monitor mitigation in problem areas, and to plan future land use. Surface displacement may be from natural or human-induced processes that cause vertical movement of the ground. In Yellowknife, and other areas in northern Canada, surface displacement may be caused by freezing and thawing of the active layer (seasonally-frozen layer) or the permafrost (perennially-frozen ground). This presents challenges that increase the cost of constructing and maintaining infrastructure (e.g. roads and buildings), especially if the displacement continues in the same direction over an extended period of time. The knowledge of where the problem areas occur and the relative magnitude of displacement provides engineers and municipal planners with key information required to reduce the cost and risk of developing and maintaining northern infrastructure.