It has become routine – each year many Instagram users create a mosaic of their Top, or Best (i.e. Most ‘Liked’) images.

Ok – I followed that bandwagon and did it too. I really don’t cafe about the total number of likes for each images or how many followers I gained in 2021.

For me – it is more the curiosity of which images were selected. Click on the image to enlarge it.

2) Inaugural use of the 23zero RTT on the FJ80. October 30, first night of really cold – snow and small lakes were frozen the next morning. Totally comfortable in the 23Zero Walkabout RTT. Next trip might install the winter liner and use the Propex heater. (Oct 30, 2021).

After a long day in my office – (read cubicle land), I grabbed beer and headed to my outdoor office. Caught the sunset too. And – yes, a horribly over processed photo. Unfortunately it does a great job showing all the dents and wrinkles on my old truck (and my face too). Such is life, an accumulation of dents and wrinkles, each with an interesting story.(March 16, 2021).

Winter camping with a “23 Zero” rooftop tent at 23 below Zero (Celsius). Heated with a Propex HS2800 heater built into a recycled metal box. Brown box supports exhaust pipes. Version 2 will use a simple bench instead of the brown box. Set up takes less than 10 minutes.(Jan 9, 2021).

This got delivered today. For those that don’t know what it is – 1981 BJ60 Toyota Landcruiser. Well – sort of. The back end was cut off and converted into this. It has a few rusty parts, a few broken parts. It was a daily driver. Yes, this 40 year old truck needs a bit of TLC. It will probably never go faster than 70 km/hr (45 mph), it won’t win any drag races, and it certainly won’t win any awards for comforts. It is what it is.
I was still in elementary school when this truck hit the road, and my kids are nearly finished high school. That’s cool.
Should I have bought a 2021 truck loaded with all the gadgets and gizmos ?.(May 5, 2021). 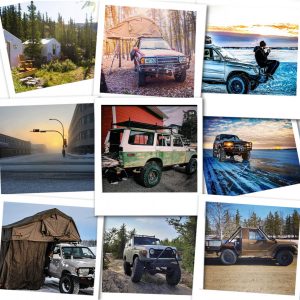 The last one, People x1 (me) resonates. No images of other people, no images of canoe trips, no images dinner parties, or other social events. The sad truth is that there were very, very few social events during 2021. Blame it on the Covoid19 pandemic Has everyone become a social recluse ?. Does everyone keep to themselves ?. Have we become a population of introverts ?

Or – is there something else ?

As I write this, a friend is a no-show for a coffee catch up.  Another friend, we were going to get together while walking their dog – two days ago. A couple of reminders along the way – and nothing. I could include a couple more examples – It it makes you wonder – is it Covoid and a fear of getting sick from someone else ?, or people don’t know how to socialize,or is there something else ?.  Maybe that helps to put vehicle obsession into perspective – vehicles break but don’t bail.

First day of winter vacation. It sucks a bit when the weather is almost as cold as I am old. If only I was 12 !.
A round of Dutch shuffleboard and a round of beer to bring in the New Year. 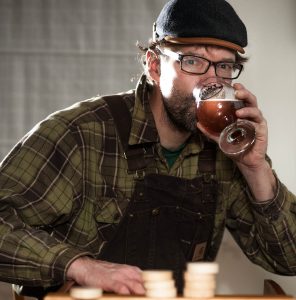 One week of vacation. Day 1 – it is -52C with windchill. My nose and cheek is still recovering from frostnip (low grade frostbite), and the whole week the temperature is predicted to by ‘extreme cold’. Drat – no working on trucks,skiing or fatbiking. I can’t take the cold like i used to.  Must be age ?.  School kids still only wear running shows, no toques (don’t want to mess their hair), and no winter pants !.

Today – some boredom. What to do all week ?.  Spent more hours surfing the internet, some useful research and plenty of mindless scrolling.  At least tonight dug out the camera and some studio lights, use me as the model :>

Used a now very ancient Nikon D700, Nikon 85mm lens and polarizer, two Paul C. Buff Einstein studio lights; behind the camera; circular reflector and 30% grid, and rear light has a 1×6 modifier with a grid. Hardest part was getting the focus – self timer, pose, click – check and adjust focus and repeat…. 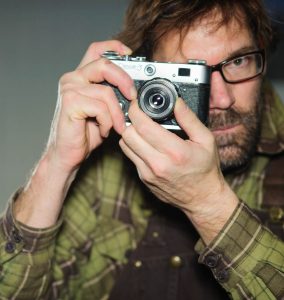 Have you ever purchased a ‘Used’ item and wondered about its history ?

If you buy a used vehicle – you can ask the owner about the vehicles history, and / or purchase the vehicle history report (e.g. CarFax) that includes accident and repair notes.

The title of this post “Project” I should probably get a girlfriend” and the text below were written by the previous owner of a vehicle I now own. The previous owner “crawlin cruiser” had purchased the 1973 FJ55 Toyota Landcruiser and described the restoration and rebuild on the ih8mud forum (https://forum.ih8mud.com/threads/project-i-should-probably-get-a-girlfriend.401231/) (July 23, 2010 – Sept 26,2018).

I have copied and condensed the text from the link above, and in bold some unique sections.

Project” I should probably get a girlfriend” 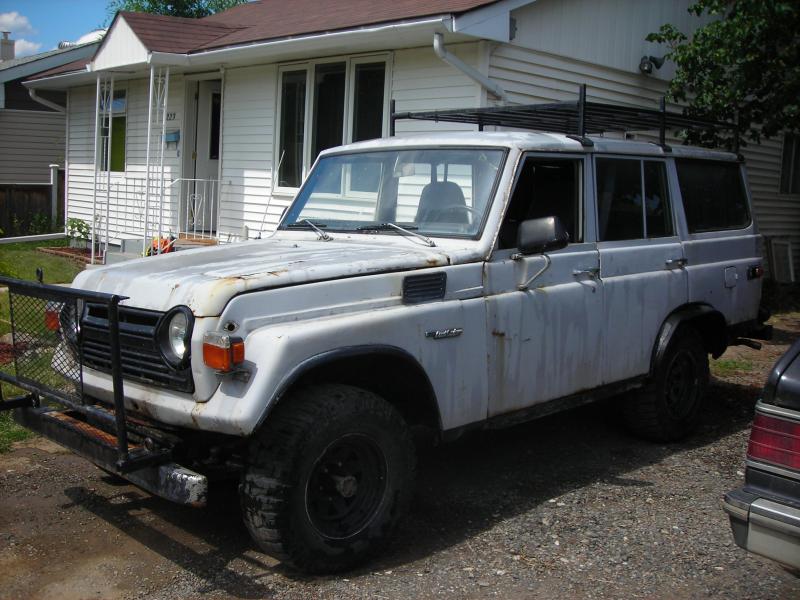 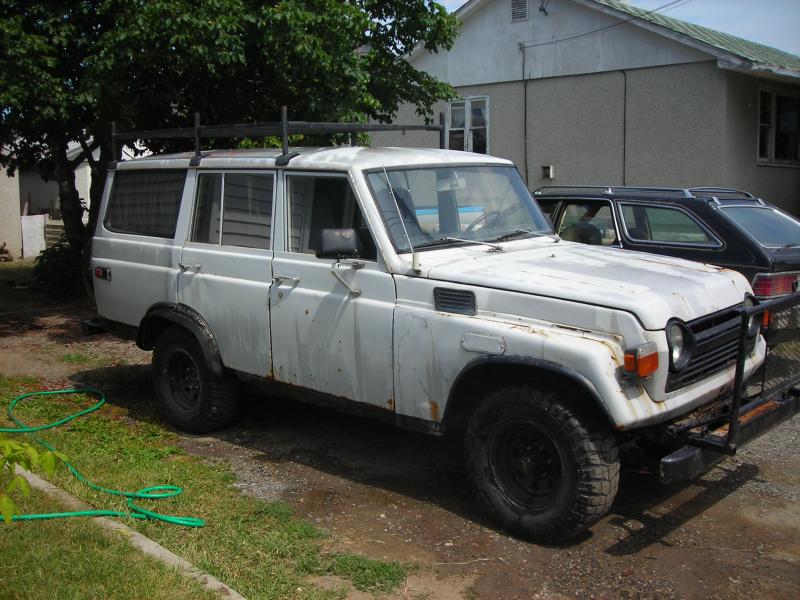 Those are the pics from last summer when I picked it up. 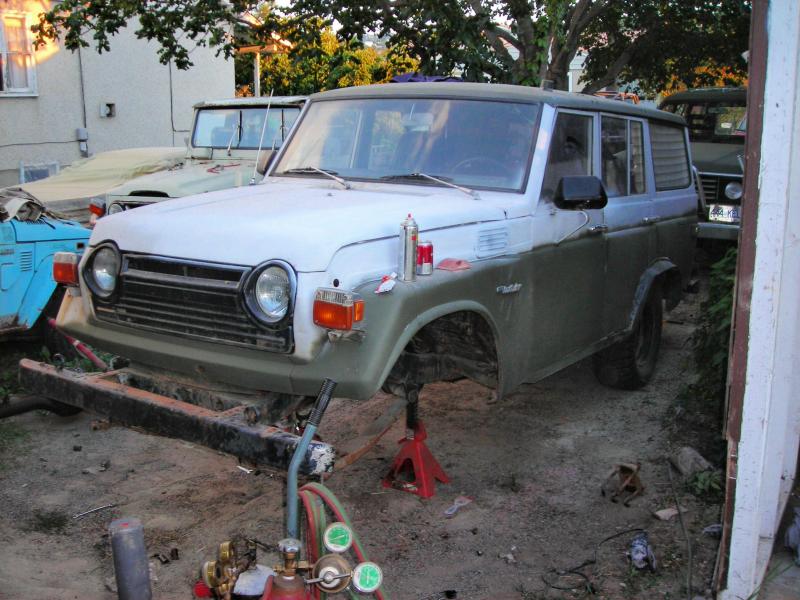 and yes those ARE fj55 bushings 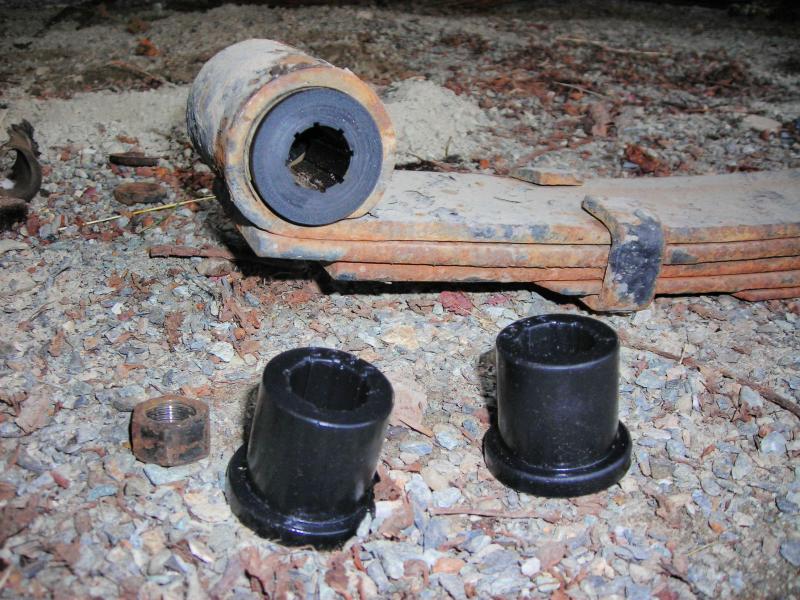 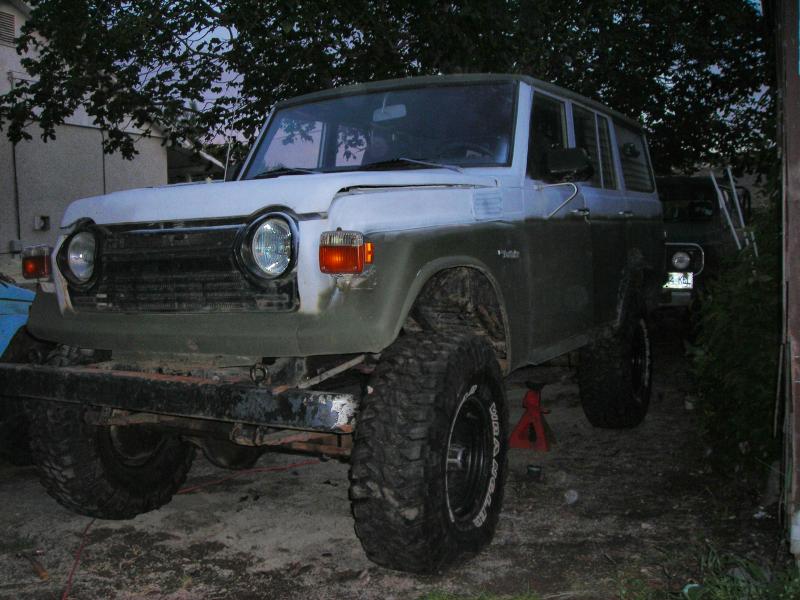 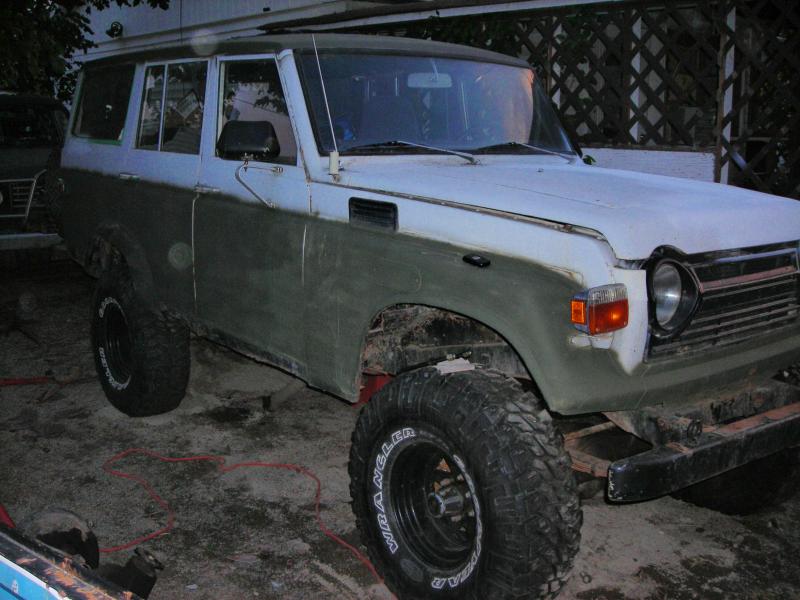 For the steering I was just going with what I have and what i know. personally I think 60 series boxes suck the big one anyways. never used a scout though?

thnaks, the po did the turn signals. guess it works? this truck is all go no show good from far far from good. paint is done,

I actually bought a set of soa axles about two months ago dirt cheap. rear even has a locker . cut the old ones out, bolt the new ones in. done. I do need to add a set of ford towers though

Paint finished and it drives. 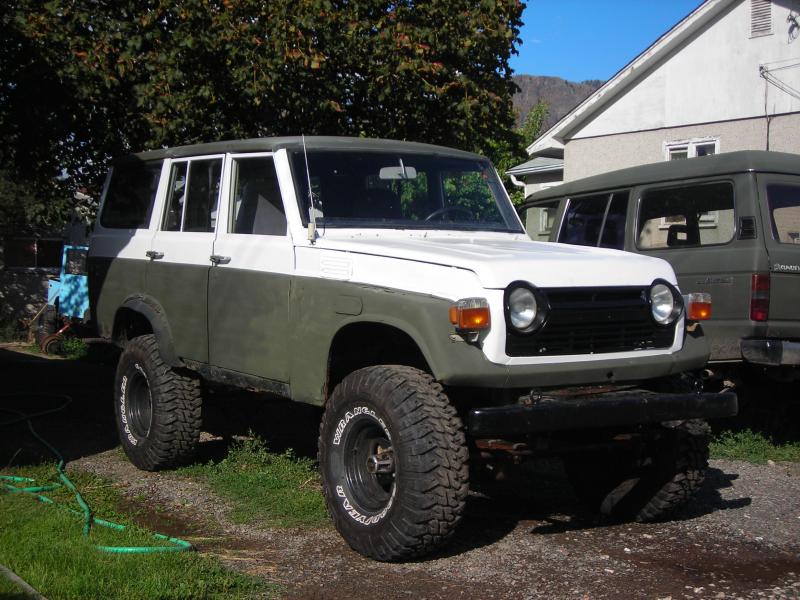 There are still rust issues in the rockers, rear fender lips and rear quarters but overall for what i have into it(which isnt very much) im a happy guy. 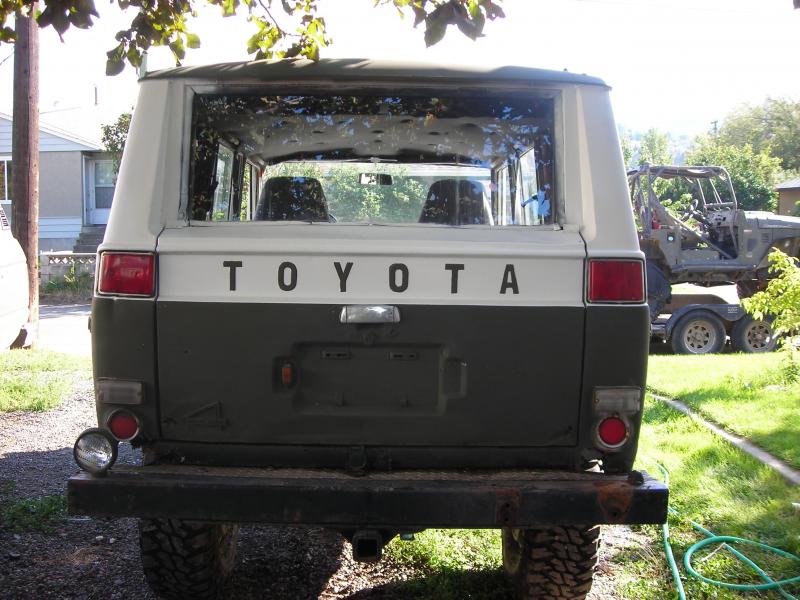 Any pics of the headliner. This looks interesting to me.

i don’t think its stock. It looks good though 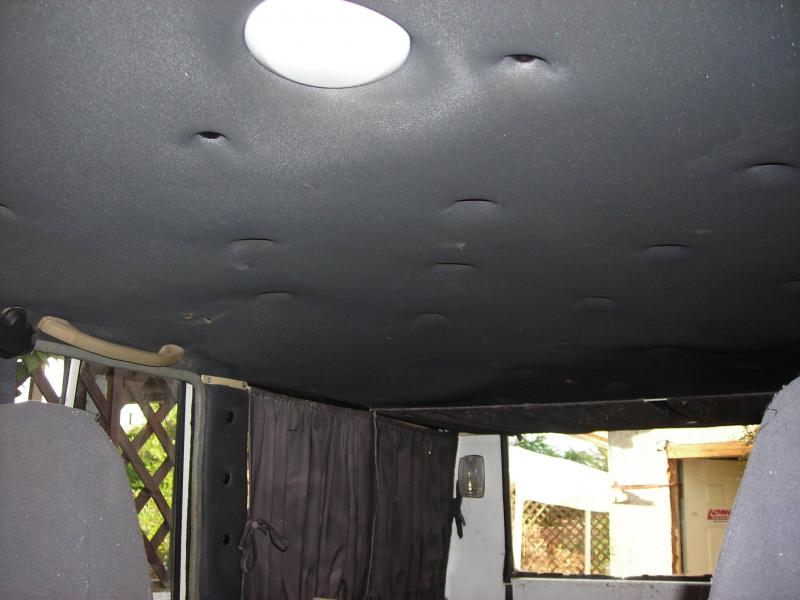 Weird… What the heck is that headliner made of? Are those indentions where it screws in?

Curtains was one of my first up grades when I got my cruiser … I took them out! Of course mine didn’t look that good. They were 1970’s bandana red looking weirdness.

I have no idea how its held up. but its soft foam with the liner over top. if I flip the truck over it would be a great place to sleep.

This project has taken a turn for the worst

Project” i should probably get a girlfriend” turned into “wholy fxxx, I landed a smoken hot redhead”

Lets just say progress has been slow.  I have stared on the rust repair, and ps.

Teaser of this weeks project 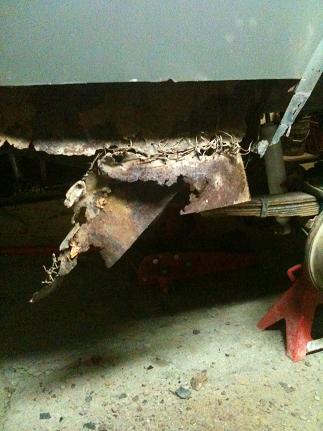 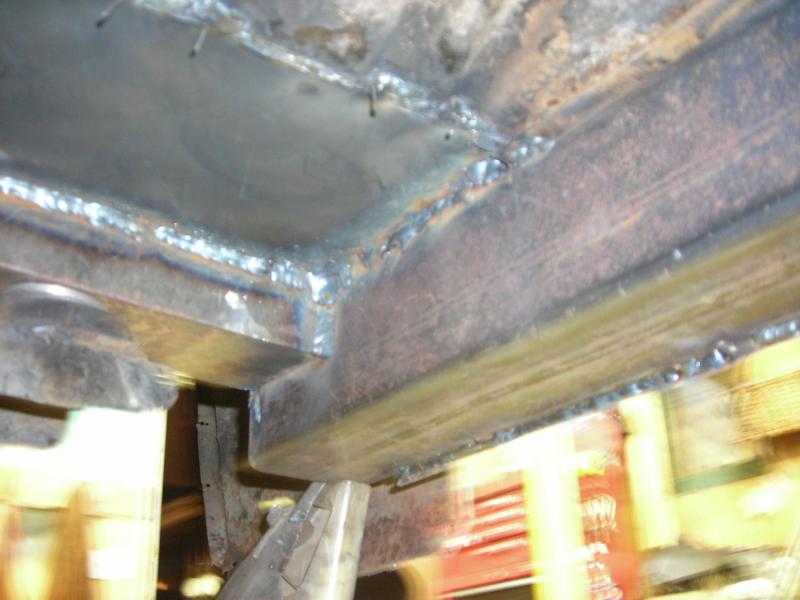 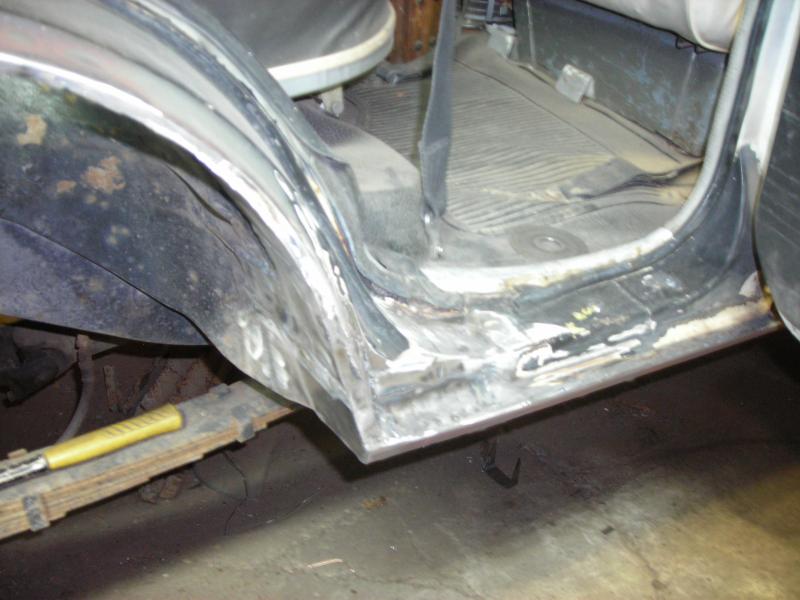 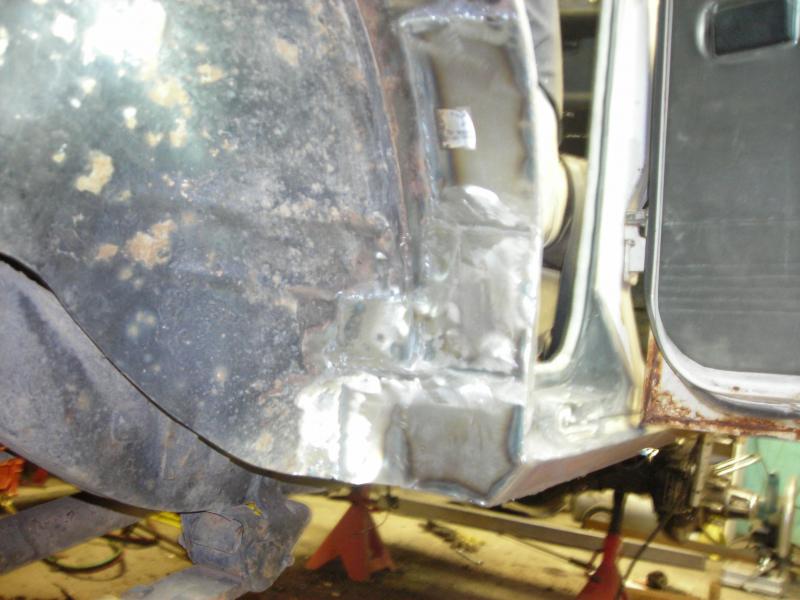 Tech question, what is the relation of a pitman arms lenth to its “home” steering box? I got a scout box as Jon sugested, but the arm is about 10″ !! i have shorted steering arms for saginaw boxes… what will this do to the steering raito?

I had no idea that you were this cool. Where did you find the 55?

I’m soo cool….. I can have a project in every section (IH8MUD forums)

Long time no update. Finished off all the little stuff. took the swiss cheese passenger fender and gave it new steel. 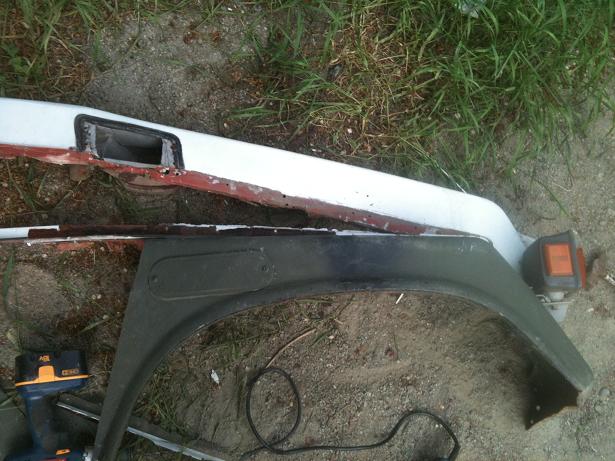 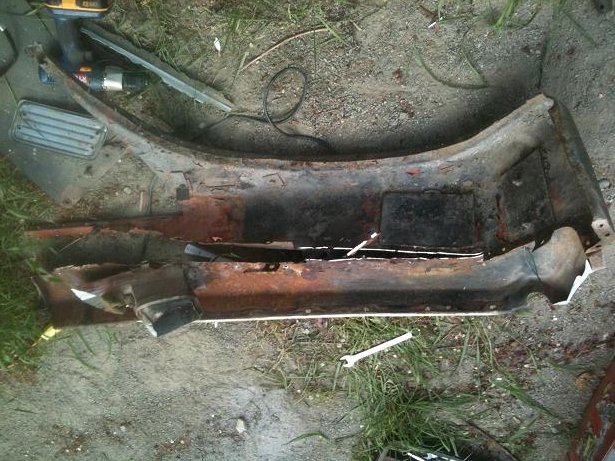 Finished product?.  I doubt it 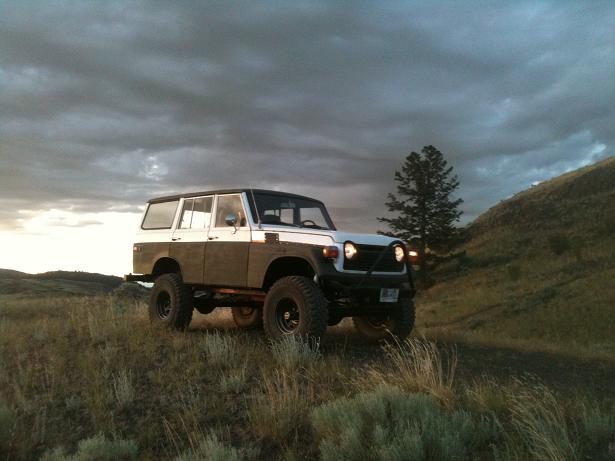 Few more little additions. I got the roof rack on, stereo installed and even got the tires ballanced

Shot of the truck at the lake with the rack 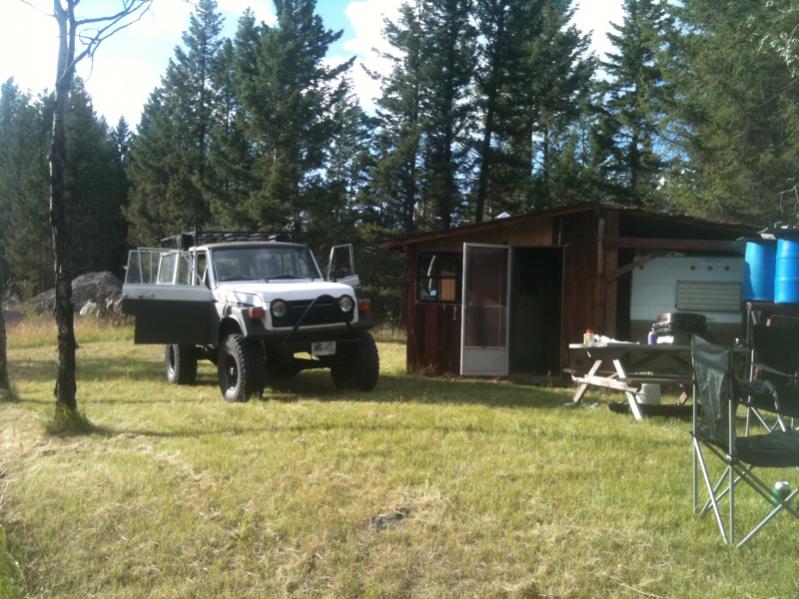 Well guys…. Time to dig this pig out of its ice sarcophagus and do some fixin. A bit of cosmetic, got the brass gear for the window. And a few small mechanical mods she will be as good as new! 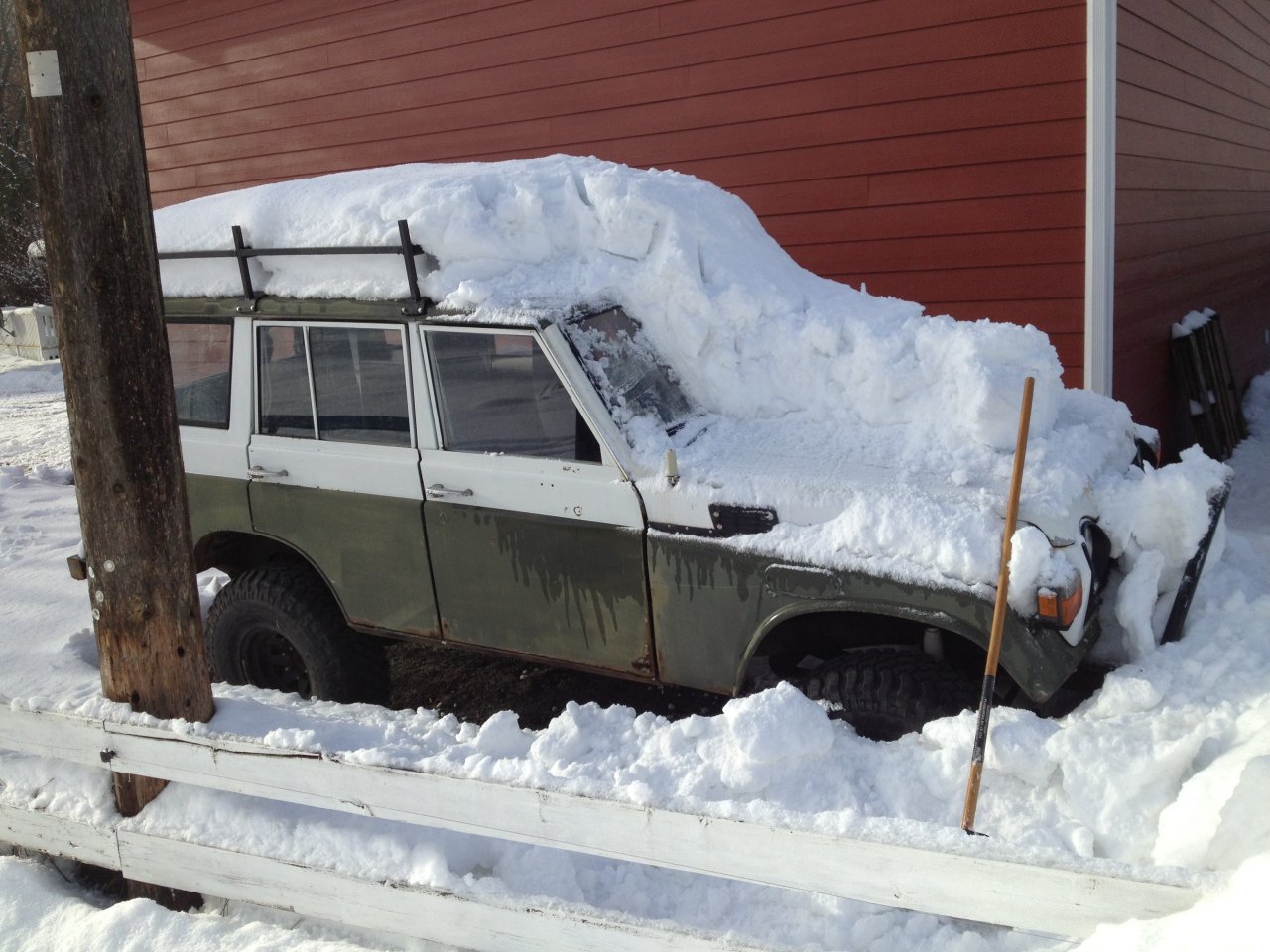 Has it been sitting there since 2011?

No not at all. Only about a year. Only reason I parked it is because the clutch is gone. So instead of a clutch job it’s getting an sm420 with an EBI adapter kit

And probably a bunch of other crap while its in the shop haha. 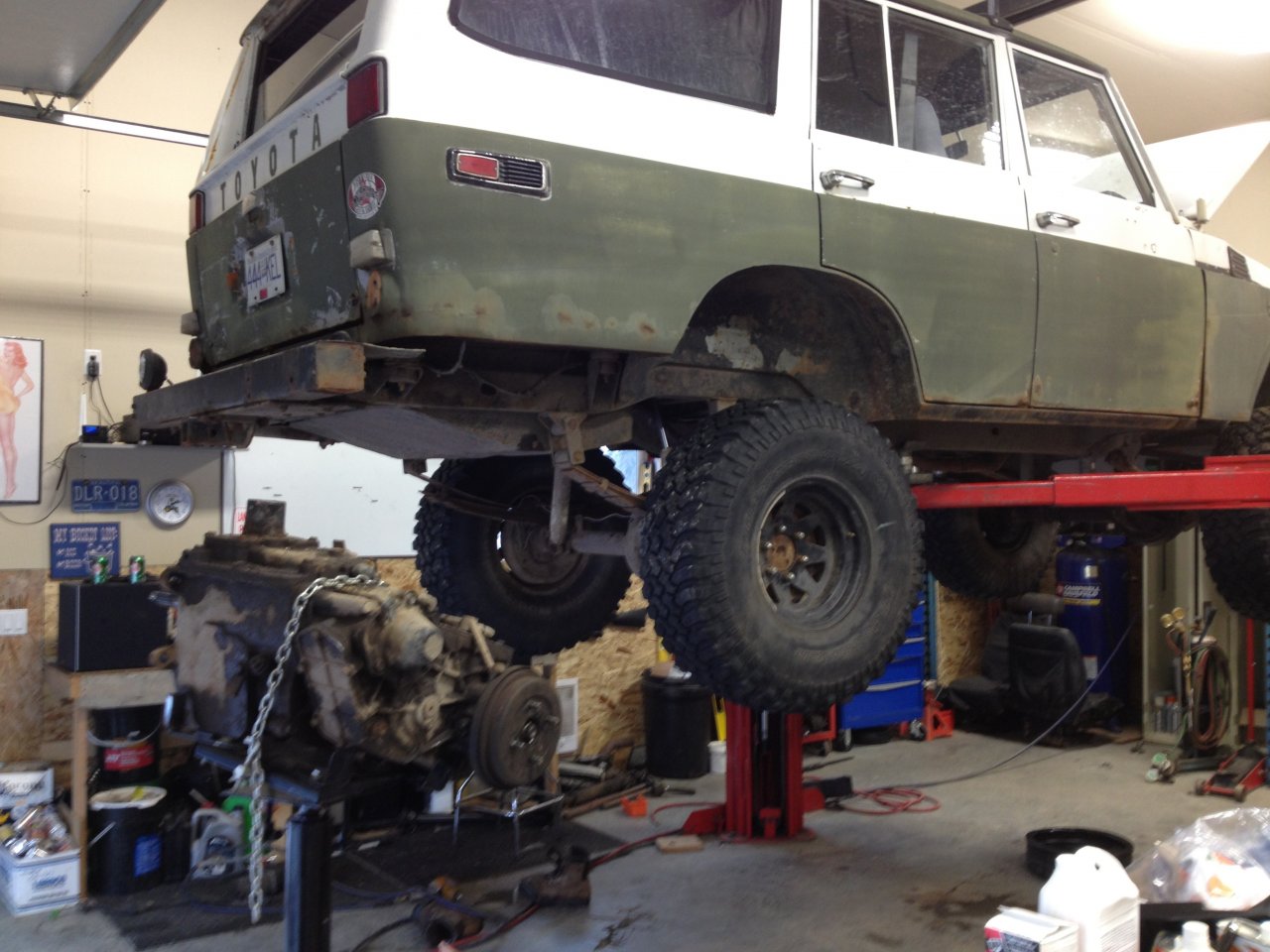 Sure did, getting married this summer. And she let me build this 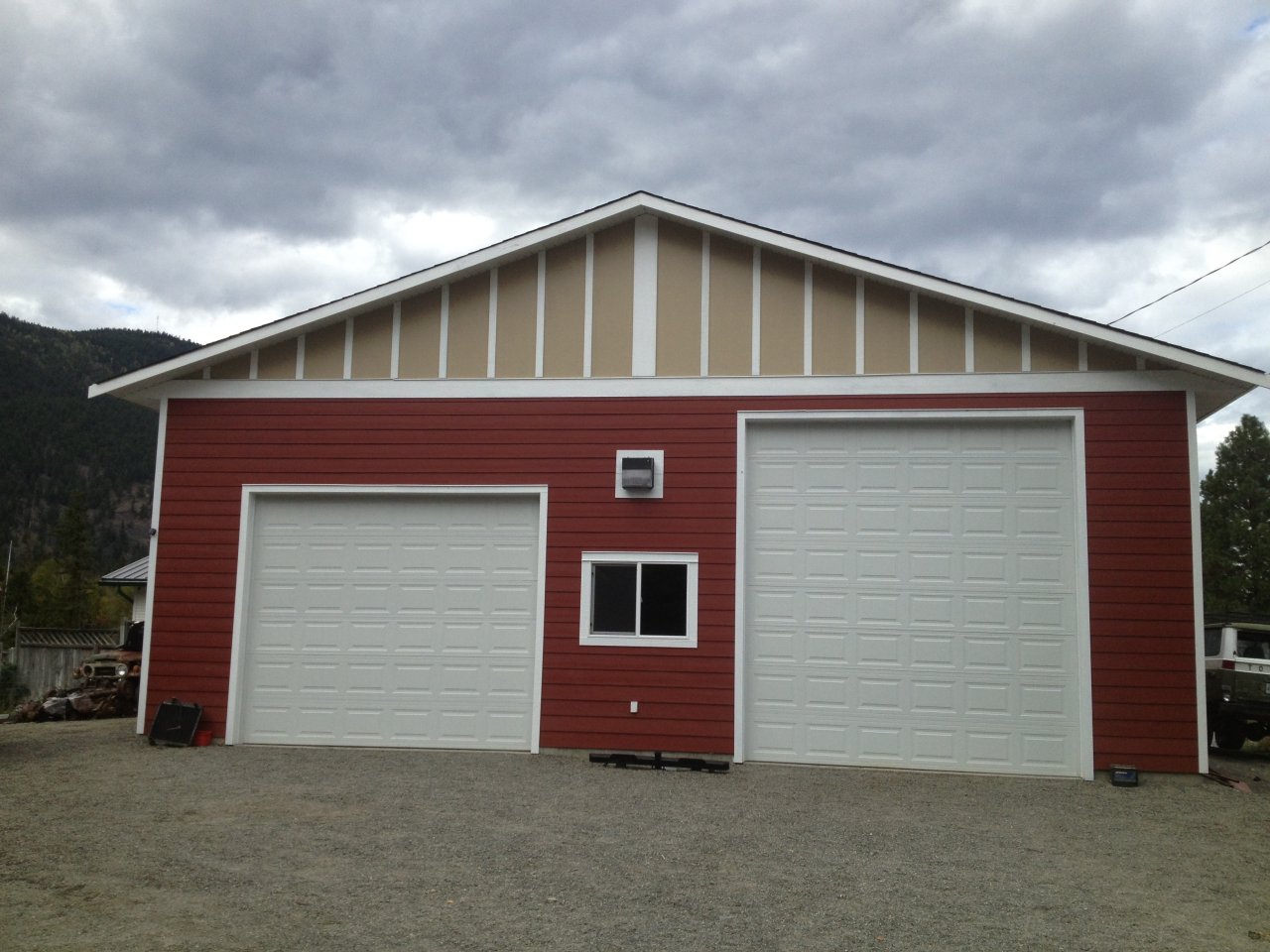 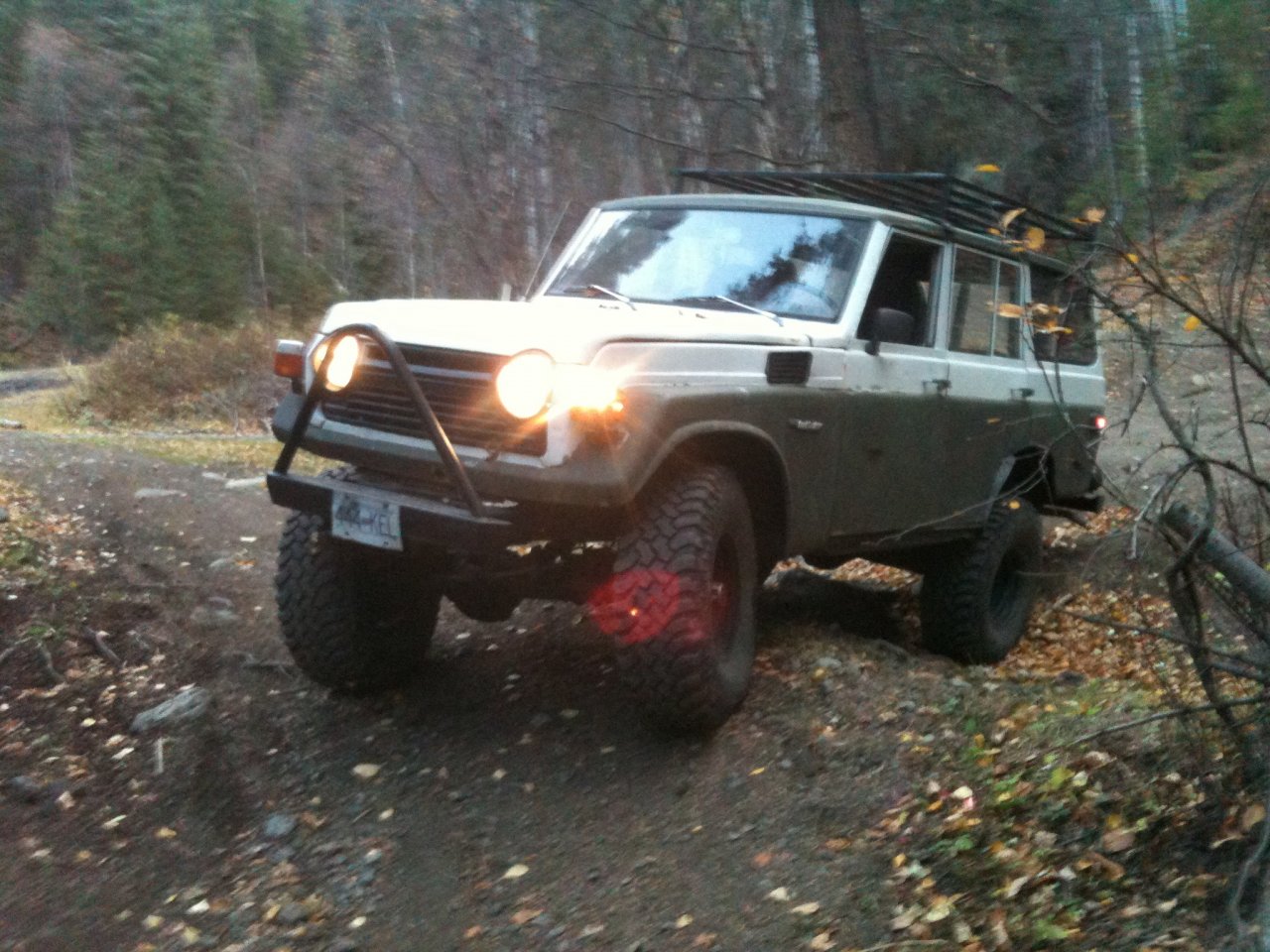 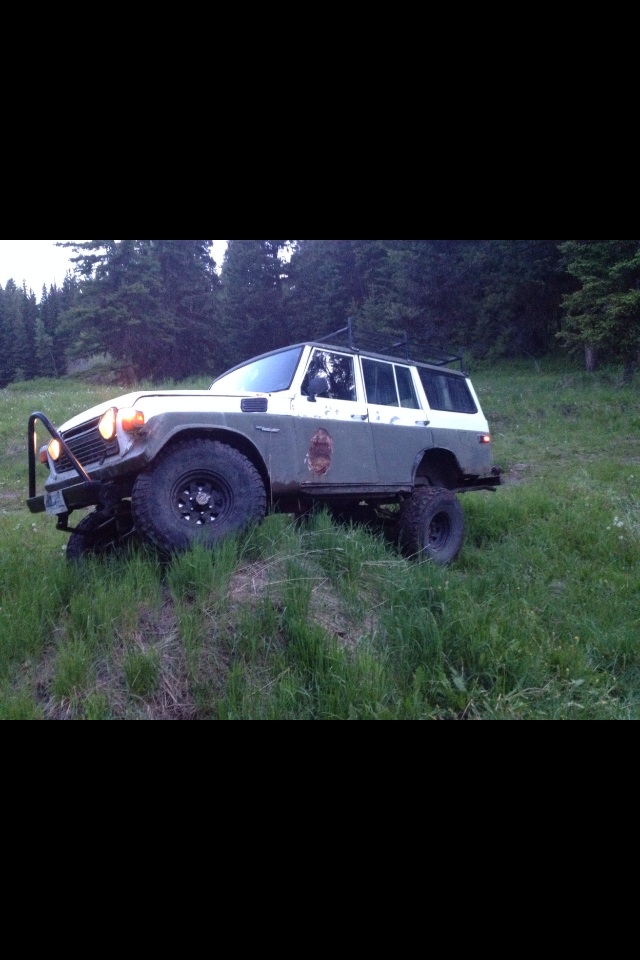 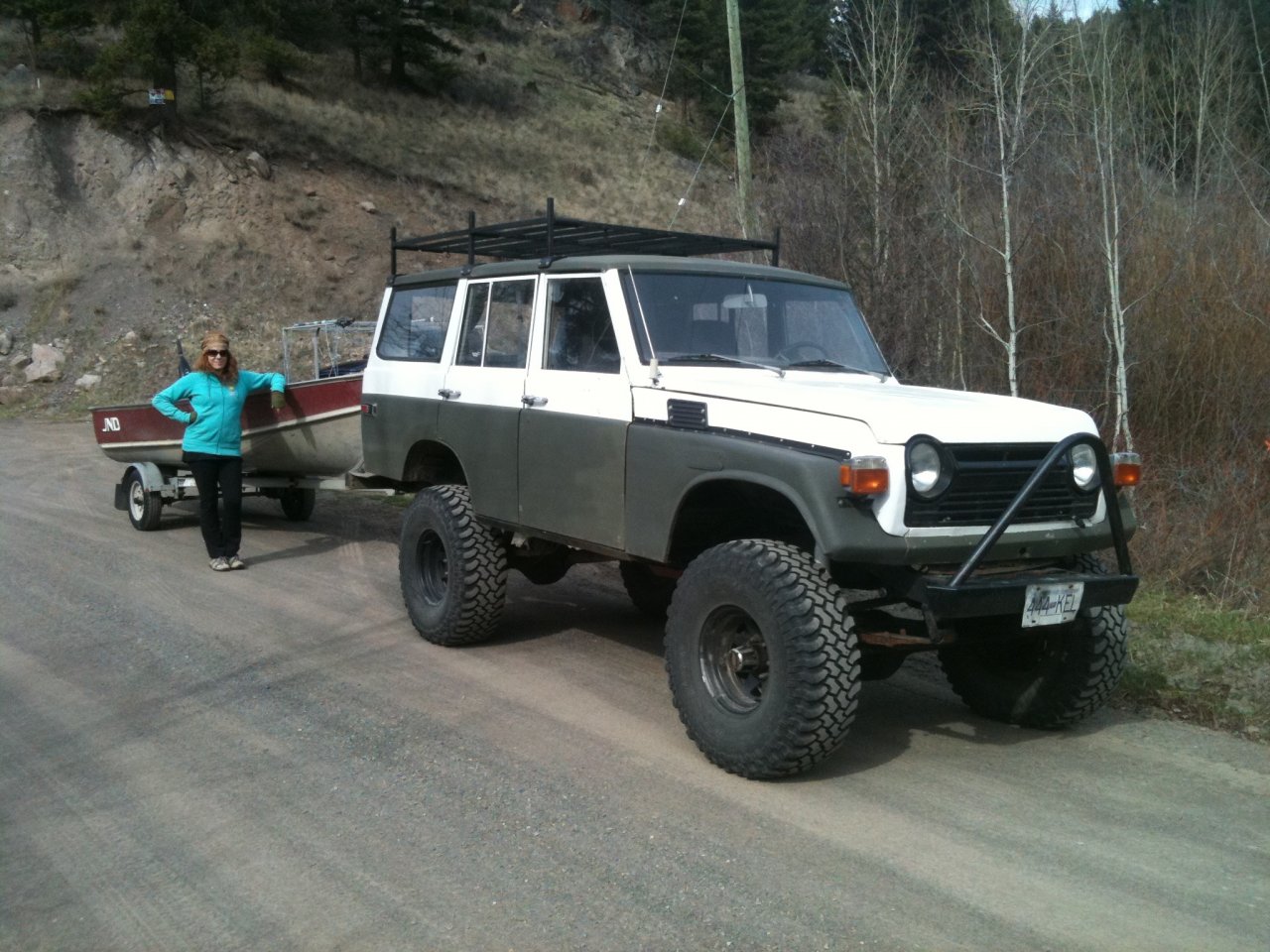 So after pulling the 4spd and transfer I found out my truck actually has an f engine. Now I know why it’s so slow haha. Has anyone put the 10 spline chev disc in the f clutch?? I’ve only done it on 2f components. Just wondering differance and whatnot.

Well The chev disc fits in the f flywheel but I don’t know how I feel about the old Style pressure plate. I think I’m just gonna tear into another parts truck and grab the 2fbits needed

Hey guys I’m still having clutch problems. I’ve got ll my 2f bits on the f engine but I have 2 different throw out bearing hubs. One has a 1 3/4 for the bearing and one is 2″. Both came off 4 spds. Does it matter what one I use??

This part of the clutch fork assembly should determine which bearing. 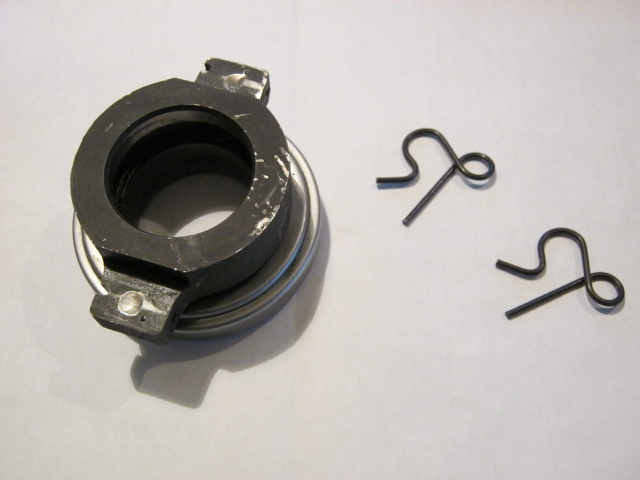 Not too much to report.. Sm420 swap worked out great. Drives good. Replaced the drivers door. But back in he shop right now for more body work. Just out for a Little rip at the river behind the farm! 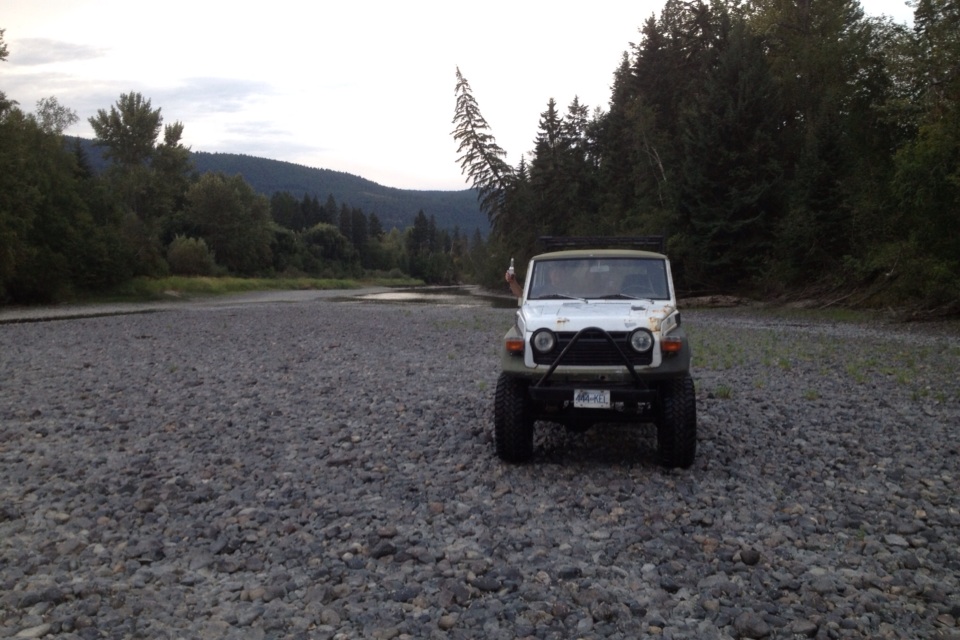 I’m also on the look out for a good drivers fender and affront rad support. Mine is beyond fixing