From the Legislative Assembly to the Yellowknife city dump.

Scroll down to see the Images

The Yellowknife city dump is probably the only dump in North America where you are allowed to salvage, meaning that what ever you see – you can take home.

On weekends during the summer months the dump can be a busy place with line-ups just to get in. Although there do seem to be ‘professional salvagers’ collecting items of monetary value e.g. aluminum beverage cans, salvagers include persons from all levels of society – the rich and the needy. On a warm sunny day, ‘dumpers’ are known to linger and chat with fellow dumpers and salvagers. The conversation may be interrupted when something catches their eye as it is tipped out of a pickup truck. As times, salvagers have even offered to remove items from your truck even before you get a chance to unbuckle your seatbelt !.

During the past few years, the Yellowknife dump has become more organized. Pay the $5 dollar tipping fee at the entrance gate, and you pass the standard Blue Box recycling bins (tin cans, paper and plastic), to where the fun begins. The paint depot (pick up a can or two of paint – perfect for finishing off that living room wall in …really, what ever color you want), then the ‘white’ appliance area (stoves, refrigerators, hot water tanks etc), the wood area (seriously depleted during the winter !), and the scrap metal area.

Following the road, it goes past the battery collection area up the hill skirting a huge pile of tires to the the main section of the dump. Until a few years ago there was one dumping area for everything else. Now, there is a rotating Three Cell System; Dump Here, Salvage Here and the third area is closed – undergoing renovation (fancy word for bulldozers are in-action making space for next week). The Dump Here area is where you can find anything, and everything; furniture, tools, clothing, musical instruments, building supplies, appliances, toys, TVs, computers, even boats.

To view a 360 degree animation of the Three Cell area click on this image.

In the wreaked cars area there are piles of cars in various states of dis-assembly. Once sufficiently picked over by salvagers, the wreaks are squishied in square bales for shipping smelters in southern Canada.

The Yellowknife dump is so popular, that there is a weekly article in the Yellowknife newspaper (Walt Humphries – Tales from the Dump), and it has been featured on several TV programs, such as CBC Wayne Rostad “On the Road Again”, and numerous magazines including UpHere (One Man’s Junk is Another Man’s Treasure), Canadian Living (Go green: Shopping at the Yellowknife dump), the Walrus (The last great city dump. Throwing it all away in Yellowknife), and the New York Times (Rush to the Garbage Dump: There’s Gold to Be Mined).

We leave you with a final image of the Yellowknife Dump, photographically distorted to resemble a planet covered with wreaked cars. 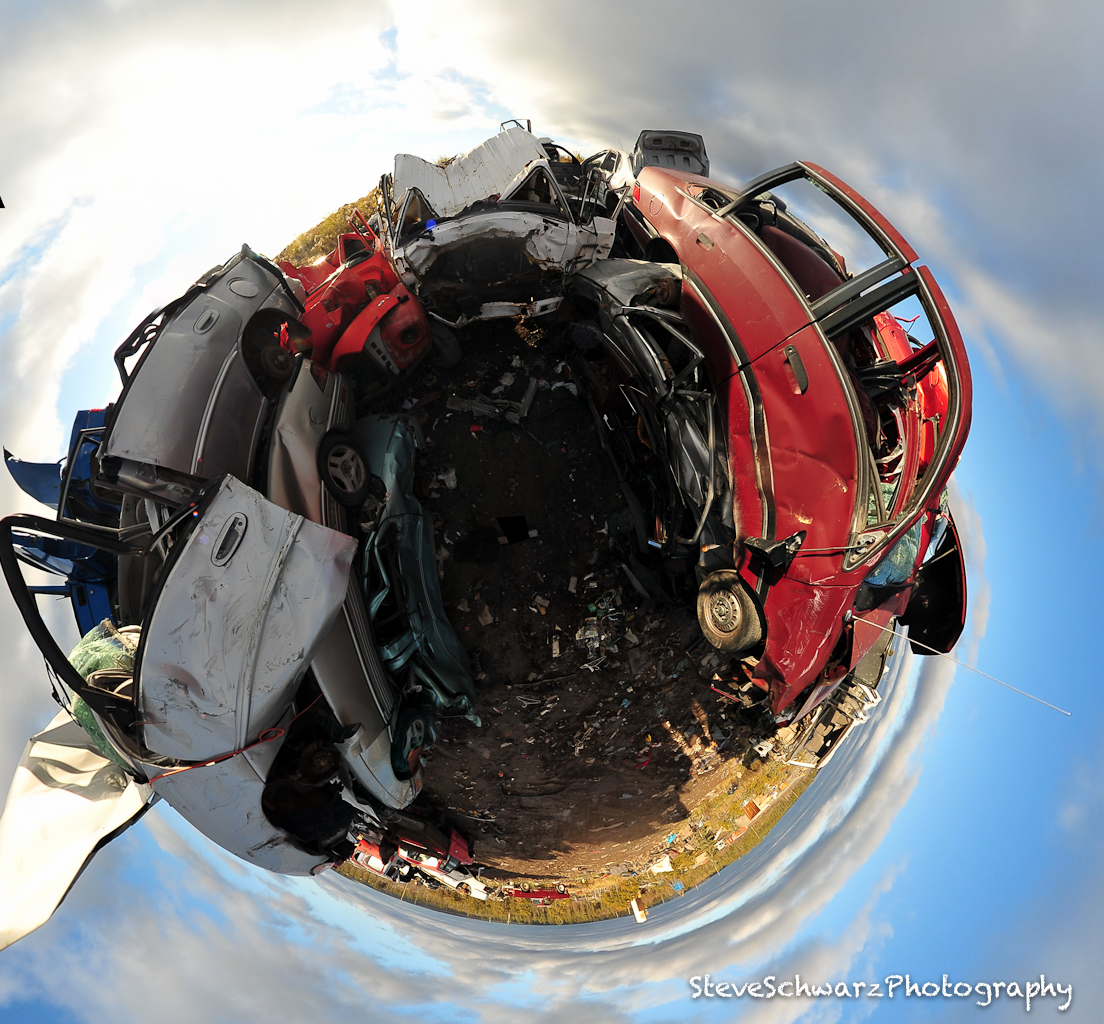 Camera gear: Nikon D700 and Samyang/Bower 8mm on a 7 foot pole. Four pictures were combined to create the panorama images.

It seemed like a perfect afternoon to wander through the Legislative Building in Yellowknife NWT.

The NWT has a unique form of government known as Consensus government. The Premier is chosen from elected Members of the Legislative Assembly (MLAs), and turn chooses the executive council (cabinet) that forms government. The remaining MLAs form the unofficial opposition.

MLAs were elected on October 3rd, 2011, and the process is underway to choose a Premier.

Interior of the Legislative Assembly…

To view the 360 degree animation click on this image 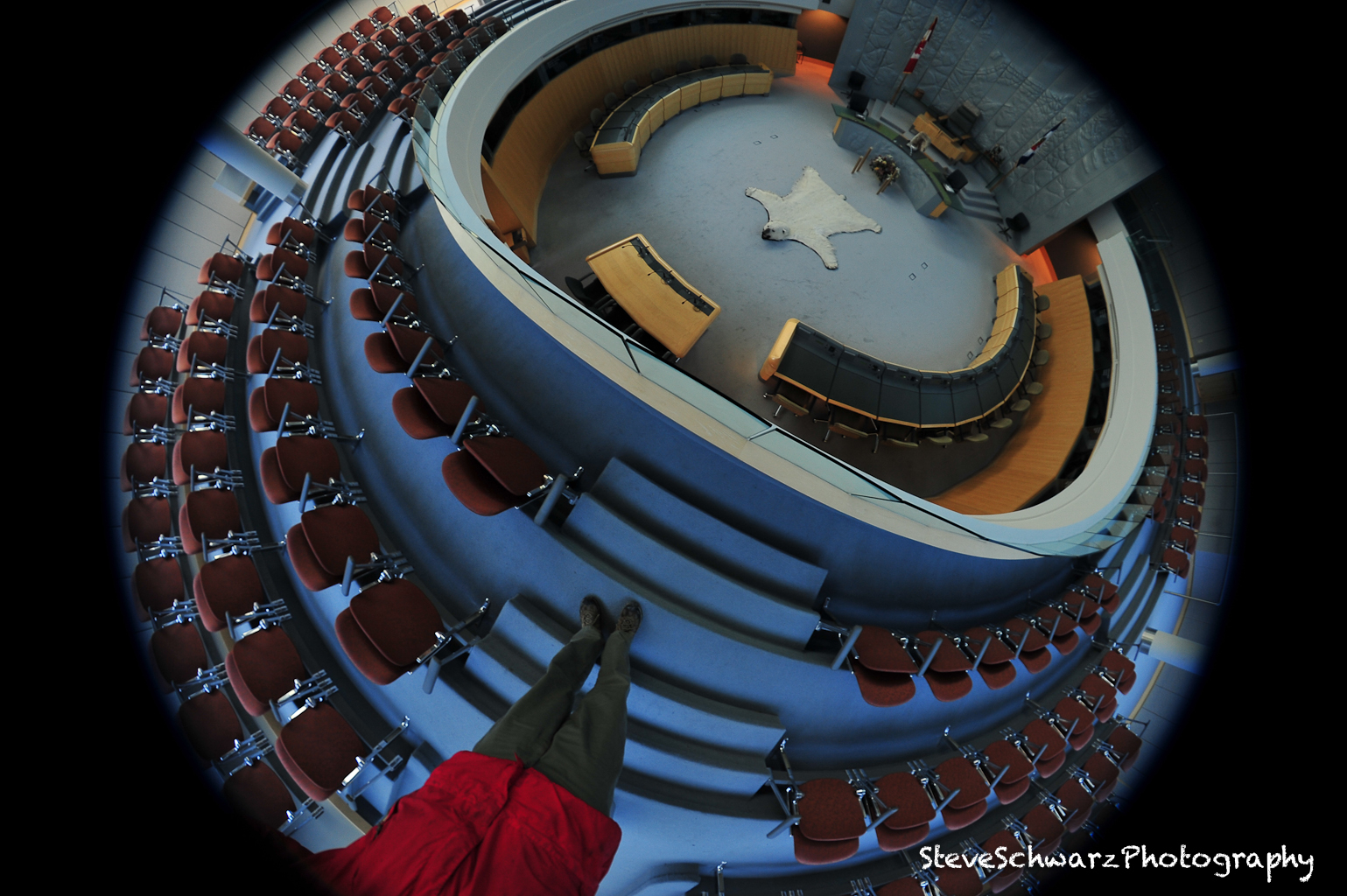 This animation requires the Quicktime Player.

Camera gear: Nikon D700 and Samyang/Bower 8mm on a 7 foot pole. Four pictures were combined to create the panorama images.