The Frostbite 45 is a ski or snowshoe event held in Yellowknife. The course is 45 kilometers over windblown lakes and narrow skidoo trails between lakes. Participants can compete the entire course, or parts of the course as part of a relay team. This year, the 5th annual Frostbite-45 the weather conditions did not disappoint, with wind chill of -44C.
For the past couple of years I have volunteered at a Check Point; checking participant bib numbers and recording arrival times to help keep track of who is still on the particular section of the course, and when possible also photographing the other volunteers, skiers, runners (snow shoe participants can of often do remove their snow shoes on the hard packed trails). This year, I wanted to see the whole course, not only to get an idea what the participants see, and also to photograph the participants at different parts of the course. To do this – I used a skidoo, and it still took me six hours to compete the course.

The event, it is not called a ‘race’ started at 10am and the Yellowknife Ski Club with a 500 meter loop through the stadium area in front of the chalet (to spread out the group, and for the benefit of the spectators) then down the icy ravine onto Great Slave Lake. On the lake, it is approximately seven kilometers of directly in-you-face -40C something wind chill. I stopped a few times along this section to photograph the long stream of participants with the office towers of Yellowknife on the horizon. Already, at this point in the course, folks were getting cold. Even from a distance, I could recognize the circular motions of arms – trying to warm cold fingers, and hands on faces blocking the wind. There was even a fellow, with his hand in front of that part of the male anatomy. Time to move on.

Following a five kilometer skidoo trail through the forest must have given them some respite from the wind, until Walsh Lake – a long narrow lake perfectly aligned with the wind direction. The first Check Point, at the 15km distance is the one I know well. Shawne and Rauri were hard at work checking bib numbers and faces. By this point, most participants had covered up their faces with ski goggles, scarfs, neoprene face masks and neck warmers. Most were ok, although the strong wind has a nasty way of finding even the small areas of exposed skin such as the tip of the nose that normally pokes out at the bottom of ski goggles. Some were not as lucky, having small patches of white skin on reddened check. Others even less lucky with long stripes of frostbitten skin caused by wrinkles in their face masks, and one fellow who as first was thought to have a pale completion and this turned out to be a face of nasty frostbite. Needless to say, his race was over as the First Aid folks did not let him continue. As participants came through the Check Point I photographed some of them, forever recording those enthusiastic yet frost bitten faces.

The cold was also having an effect on my camera gear, and every few photos the viewfinder would stay black (the mirror had locked in the up position), and the LCD display read ‘err’. I now know what error message means, it is the cameras way of saying it is too darn cold and that the cameras normal operating temperatures range is no lower than 0C. A good time to leave the camera in my coat and let it warm up. By then, it was nearly 12:15, and in the distance back along the course we could see some participants had not yet completed the first section. For safety reasons, the Check Point is scheduled to close at 12:30, and those that had not yet past through the Check Point by that time would not be allowed to continue. It seemed like a good time to move on, as I did not want to be around or photograph the stragglers coming through after 12:30.

The course continues directly upwind to the end of Walsh Lake, then up over a hill and down to Prosperous Lake. From there I could see a long line of skiers and runners enduring a crosswind reroute to Check Point 2. Most of these folks I had already photographed at Check Point 1. Since my plan for the day was to photograph different participants at different parts of the course, I took a short cut and headed down wind towards Check Point 3 at the south end of the lake. On the way, I could see skiers and runners as tiny specks in the distance. Not far from Check Point 3, I noticed some incredibly scenic cliffs perfect to photograph the participants as they past in front. Not wanting to wait in the wind for the next skiers or runners to arrive, I sought shelter and found the perfect spot. There, out of the wind and actually being warmed by the sun were two volunteers from the Yellowknife Skidoo Club. We chatted and every 10 minutes or so I pushed down the visor of the skidoo helmet and peeked up wind to look for and photograph the next skier or runner as they passed by. Without the visor, the wind wanted to instantly freeze my eyes. Fortunately I had brought two cameras. The first was now completely dead. Even with extra batteries (I had bought 5 extra batteries) the LCD screen was blank. By 1:30 the second camera was starting to lock up and show the now all to familiar ‘err’ message on the LCD screen. A few photos later and it also went completely dead. Both cameras were now inside my coat – stone cold, and useless.

My job was to photograph the event, and by this point for most participants were still on the trails and had several hours to go before they completed the course. Without a camera, my contribution to the event was over. Being asked to retire from the event due to frostbite is one thing, as a photographer being forced to retire due to frozen cameras is another. By the time I got home at 4pm, not only were the two cameras still frozen, frost on the inside of my skidoo helmet had frozen my beard. A few tugs, and off came the helmet along with a tuft of beard hairs (just the grey ones right). My neck warmer had also frozen to my beard, tugging on it would have yanked out most of my beard hairs – outch. By 6pm I have thawed, the cameras have thawed (and are now working again), photos have been viewed, and I can’t help think about the folks that are still out there, the participants and volunteers.

Frozen cameras aside, it was again a rewarding experience to be a volunteer at Frostbite 45. This is however my last. Many participants in the Frostbite 45 have taken the time to stop, and say ‘thanks for helping’, then continue the course. Thanks folks. I would also like to thank the crew that organizes and sets up the event year after year; Shawne, Damain, Michael, Elaine (‘Master Tracker’, Tom, the volunteers at the Check Points, and the many clubs (Yk Skidoo Club, Amateur Radio Society), and all companies that provide products, services and people to make the Frostbite 45 a safe and successful event. 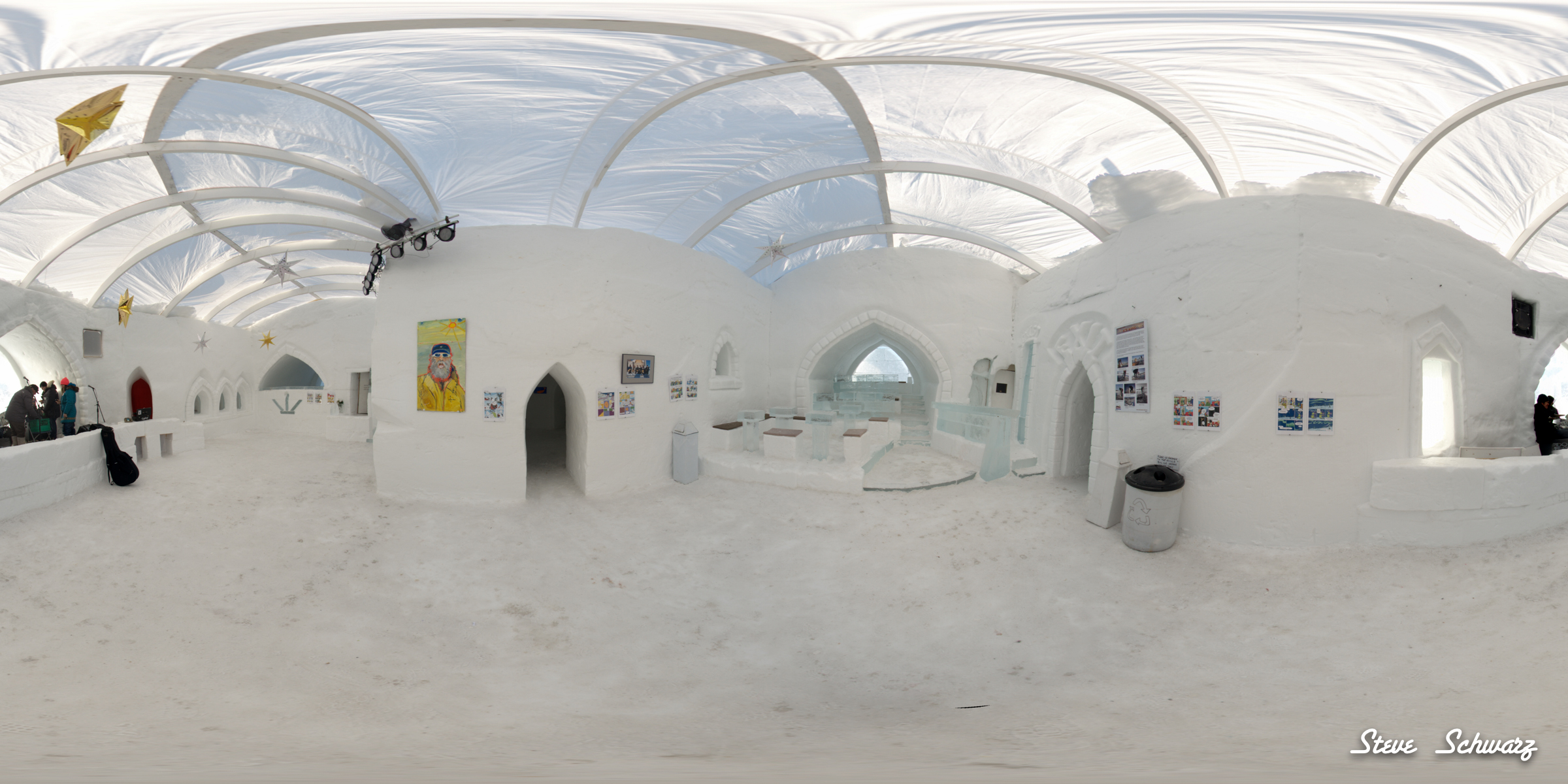 There is only one Snowking, see here wearing his trademark yellow jacket. As usual, Snowking was willing to pose for the camera, and simply walked into to the picture. Five pictures were combined to make this mosaic.

A view of the inside of the Snowking’s Castle, during the 19th annual Snowking Winter Festival.

The Royal Courtyard. Click on the image for a larger view.

The view from the top of the Castle, and the “Deadman’s slide”. Click on the image for a larger view. 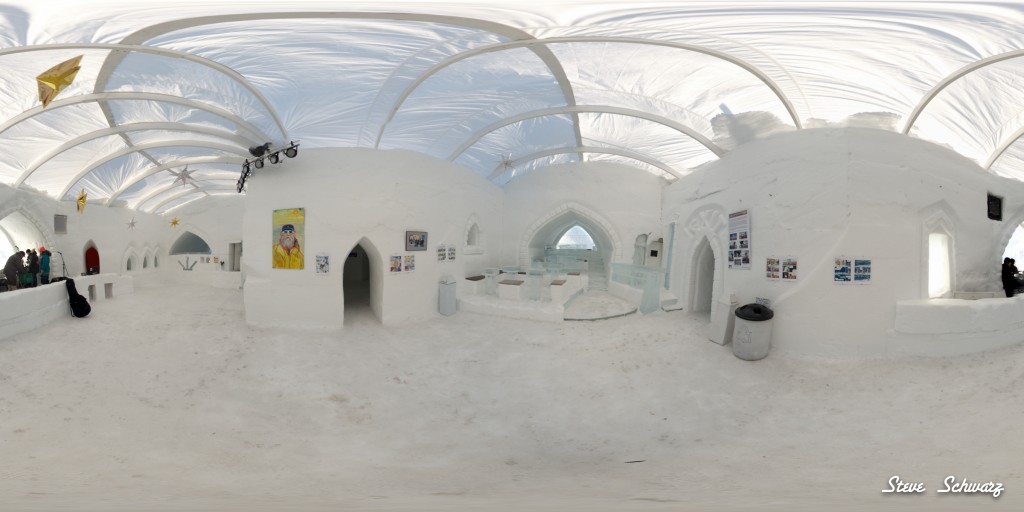 The Ballroom, or call it what you want. This is where the bands play!!. Click on the image for a larger view.

To view photos and 360 degree animations of the 2013 Snowking Winter Festival – Click Here.

For more info on the Snowking Winter Festival, Click Here

Camera gear: Nikon D700 and a Peleng 8mm lens on a custom monopole. Five pictures were combined to create the panorama image on this page. 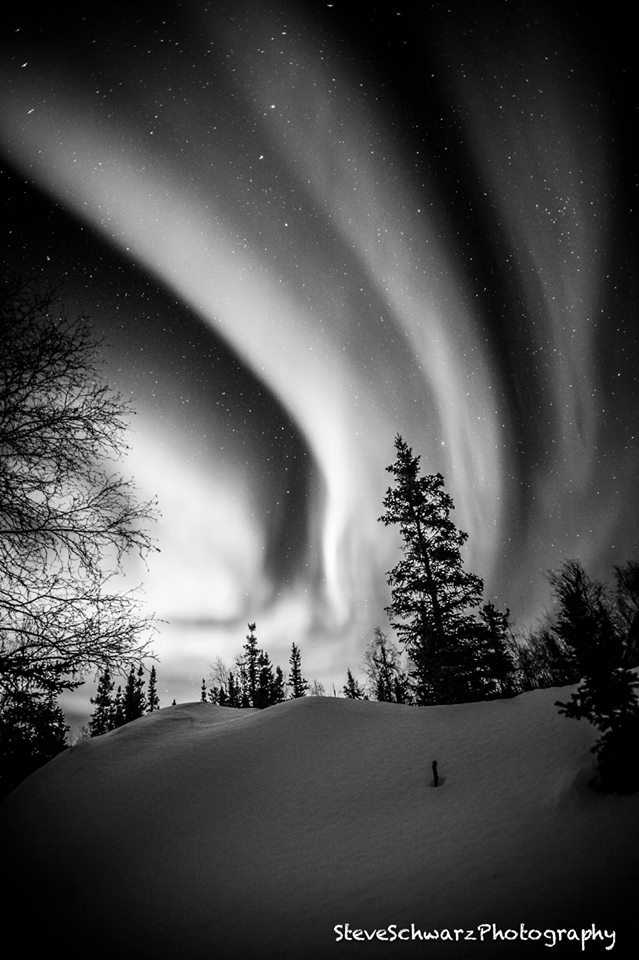 ‘Aurora in B&W’. Ok- I know what you are thinking…’Surely there is a law against posting Aurora photos in black and white’, and do spare me the threats of a lawsuit.Use your imagination. A crisp clear winter evening, the aurora are dancing all across the sky. As you stare at the aurora, they speed up and slow down, they fade and grow into bright vibrant colors of green, magenta and thin streaks of white on the lower edges of the aurora. You see shapes of fire, faces and figures that at times seem to be waving. Your world is above you. There are no thoughts of yesterday or plans for tomorrow, your mind is in the present.Even a photo in color cannot give you a feeling of being there. You need to experience the aurora with your own eyes, and see the colors in your own mind.